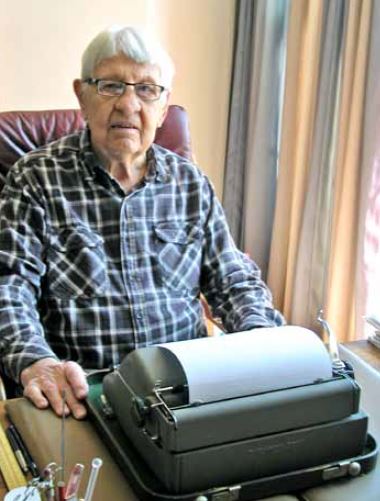 Frederick Christoffel Eloff was born in the Pietersburg district of the former Transvaal province (now Limpopo) of South Africa on 18 May 1920. After matriculating from the Pietersburg High School in 1936 he obtained a BSc degree in zoology and botany at the University of Pretoria in 1939 and was appointed as a technical assistant at the National Zoological Gardens in Pretoria on 1 December 1939. While working, he enrolled as a MSc student in zoology at the University of Pretoria which degree was awarded with distinction in 1942 based on a dissertation on the osteology and myology of the tropical vlei rat Otomys tropicalis.

He was appointed as Lecturer in the Department of Zoology of the University of Pretoria in January 1943. When he was awarded a prestigious British Council Travel Grant for a sabbatical year in 1951 he first studied comparative anatomy at the University of London and presented a lecture to the Fauna Protection Society of London on wildlife preservation in South Africa. This was an indication of his developing interest in wildlife conservation. He concluded his sabbatical at the Hubrecht Laboratory for Experimental Embryology at Utrecht in the Netherlands and eventually received a PhD degree.

Upon his return he was appointed as Professor and Head of the Department of Zoology of the University of Pretoria and held this position until his formal retirement in June 1985. During this time he developed a deep interest in mammal ecology and wildlife conservation, eventually becoming the Chairman of the then National Parks Board. In 1969 he established the Mammal Research Unit in his department. From 1962 he was instrumental in developing a BSc (Honours) programme in wildlife management in his department with the assistance of Mr Theuns Steyn, then Director of the Transvaal Division of Nature Conservation, and Dr Anton Rupert, President of the South African Nature Foundation. This programme started in 1965 with five consecutive visiting professors from the USA and climaxed in 1969 when I returned from a four-year long study in wildlife and fisheries science for a PhD degree at Texas A&M University after being granted paid leave of absence by my then employer, the Transvaal Division of Nature Conservation. On 1 January 1970 I was fortunate to be seconded to the University of Pretoria as Senior Lecturer in the newly established Eugéne Marais Chair of Wildlife Management in the Department of Zoology to train students at the graduate level .

Developing a fascination with the Kalahari ecosystem Prof Eloff was most happy when travelling through this vast wilderness where he ultimately became fascinated by the ecological adaptability which allowed lions as the apex predator to survive the fluctuations to which plant and animal life are subjected.

As an undergraduate student he was responsible for turning me from the path of becoming a veterinarian to one of a desert and carnivore ecologist. He was the mentor of many young scientists who eventually became experts in their own right. Soon after joining his department he asked my advice about his desire to continue to study lions in the Kalahari, a topic which he already addressed in a research paper in 1964. As I was aware of tracking large carnivores in the snow in North America I suggested that he study the lions of the Kalahari by using the expertise of the San trackers to read the signs on the red sand of the Kalahari.

From 1970, Elias le Riche, I and numerous San trackers toiled in the heat and sands of the Kalahari to assist Prof Eloff in unravelling the life and times of the lions. What always amazed me was his tenacity to make sure of every detail which he then carefully noted in his diaries at night. These notes became a series of valuable scientific papers and later culminated in his books Jagters van die duine - die storie van die Kalaharileeu and Hunters of the dunes – the story of the Kalahari lion. The knowledge which these books contain will never lose their value just as my privilege of having known and worked with him will never fade.