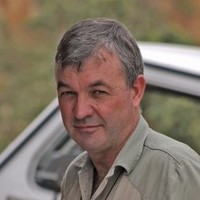 Jacobus Gabriël (Kobus) du Toit was born on 8 December 1956 in Worcester in the Western Cape province of South Africa where the black rhinoceros once roamed free. He obtained degrees in animal science, wildlife management and veterinary science, the latter as the President of the Onderstepoort Veterinary Student Council, before becoming involved in a lifetime of work in wildlife health, conservation and production. He has published or contributed to numerous books, articles and has been involved in various consultations, radio and television programmes on wildlife production and conservation. He has developed the medicinal benefits of indigenous plants and is a Trustee of the South African Veterinary Foundation.

From an early age he accompanied his parents on visits to wilderness areas and had a close relationship with his father who gave him the opportunity as a boy of six years to see the film Hatari in which John Wayne captured a black rhinoceros, buffalo, gazelle and a wildebeest with a lasso and vehicle for zoos in East Africa. The well-known Jan Oelofse and later owner of the Mount Etjo Wildlife Ranch in Namibia was the handler of the captured animals.

After obtaining a degree in animal science in 1978, Kobus du Toit joined the South African Air Force to advance conservation on their properties. This eventually lead to the proclamation of the Corbadraai Nature Reserve near Polokwane and the development of conservation policies for the properties under the control of the then South African Defence Force. Meeting Dr Nolly Zaloumis of KwaZulu-Natal at a nature conservation conference in Stellenbosch in July 1978 eventually lead to a gift of five white rhinoceroses for Corbadraai Nature Reserve by the then Natal Parks Board which duly arrived in the winter of 1980. This was the catalyst which paved the way for a lifetime of involvement in the conservation and management of rhinoceroses and his desire to become a wildlife veterinarian. It has lead to a paradigm shift in the conservation attitude of the South Africa National Defence Force, the promotion of using elephants to track rhinoceros poachers and eventually the use of DNA as a tool in the conservation of rhinoceroses.

Due to increasing attempts to poach rhinoceroses for their horns he developed a programme to harvest their horns commercially in 1995. He also developed the use of a sling to transport rhinoceroses with a helicopter after immobilizing them chemically. In doing so he has undoubtedly played a key role in ensuring the future if these giant pachyderms.